Behind the Backlash: White Working-Class Politics in Baltimore, 1940-1980

In this nuanced look at white working-class life and politics in twentieth-century America, Kenneth Durr takes readers into the neighborhoods, workplaces, and community institutions of blue-collar Baltimore in the decades after World War II.

Challenging notions that the "white backlash" of the 1960s and 1970s was driven by increasing race resentment, Durr details the rise of a working-class populism shaped by mistrust of the means and ends of postwar liberalism in the face of urban decline. Exploring the effects of desegregation, deindustrialization, recession, and the rise of urban crime, Durr shows how legitimate economic, social, and political grievances convinced white working-class Baltimoreans that they were threatened more by the actions of liberal policymakers than by the incursions of urban blacks.

While acknowledging the parochialism and racial exclusivity of white working-class life, Durr adopts an empathetic view of workers and their institutions. Behind the Backlash melds ethnic, labor, and political history to paint a rich portrait of urban life--and the sweeping social and economic changes that reshaped America's cities and politics in the late twentieth century. 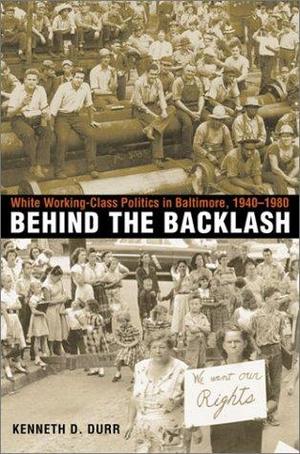